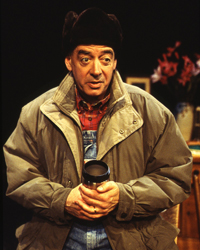 Burn baby, burn! Rod Beattie, aka Walt Wingfield, brings the heat as he returns in Wingfield’s Inferno, the sixth installment of Dan Needles’ hilarious series. A fire devastates the Orange Hall in Larkspur and Walt takes it upon himself to organize the rebuilding. But with high insurance costs and government red tape in the way, Walt has no choice but to light a fire under a colourful cast of local characters for help.