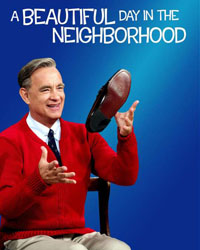 A Beautiful Day in the Neighborhood

× Throughout his life, Fred Rogers made many surprising friendships. One was with a journalist named Tom Junod. For Junod, studying Rogers starts off as a job. But it's not long before he falls under the spell of a man who influenced generations of children. Wearing his heart on his sleeve and unabashedly telling people that they deserve to be loved, Rogers sometimes touches a nerve with the more cynical types. But for Junod, befriending the man ends up becoming a life-altering experience. Biography, Drama 1h 49m Rated PG