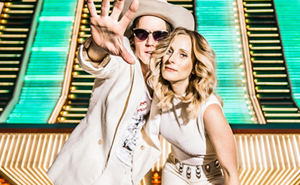 Glam and sleaze, desert grit and subway rats, scum-bags and fakers, hot messes and cold shoulders: welcome to the world of Whitehorse. Whitehorse's brazen sonic breadth encompasses psychedelic surf, arid border rock, lo-fi ingenuity and icy 80's sparseness. Latest album, Panther In The Dollhouse, brings a twist to Whitehorse's studio approach with the addition of beats and bleeps from NYC hip-hop production duo Like Minds (Kanye West, Snoop Dogg). But while each new album sees the duo's sound evolve, the essence of Whitehorse's musical identity remains their dizzying guitar playing and vocal chemistry.
On Panther In The Doll House, Whitehorse delves deep into body politics and explores questions of consent, self-determination and, ultimately, freedom, largely from the perspective of women. Layers of retro psychedelic pop bubble up on ‘Nighthawks,’ a song that explores the constructs of perpetrator and victim on the streets. ‘Nighthawks’ is a companion piece to the slow-burner ‘Evangelina’ from the album Leave No Bridge Unburned, which reimagined the sex worker as superhero in celebration of those who challenged Canada's prostitution laws at the Supreme Court of Canada in 2013. Panther In The Doll House also sees Whitehorse fully embraces cinematic fiction with neo-noir drama and high-gloss showmanship. From the grindhouse ballad of ‘Die Alone’ to the peroxide burn of ‘Trophy Wife,’ Panther In The Doll House is packed with inventive sonic elements and neo-noir drama, full of flawed characters, foiled plans and anti-fairytales. Presented by Inside the Music